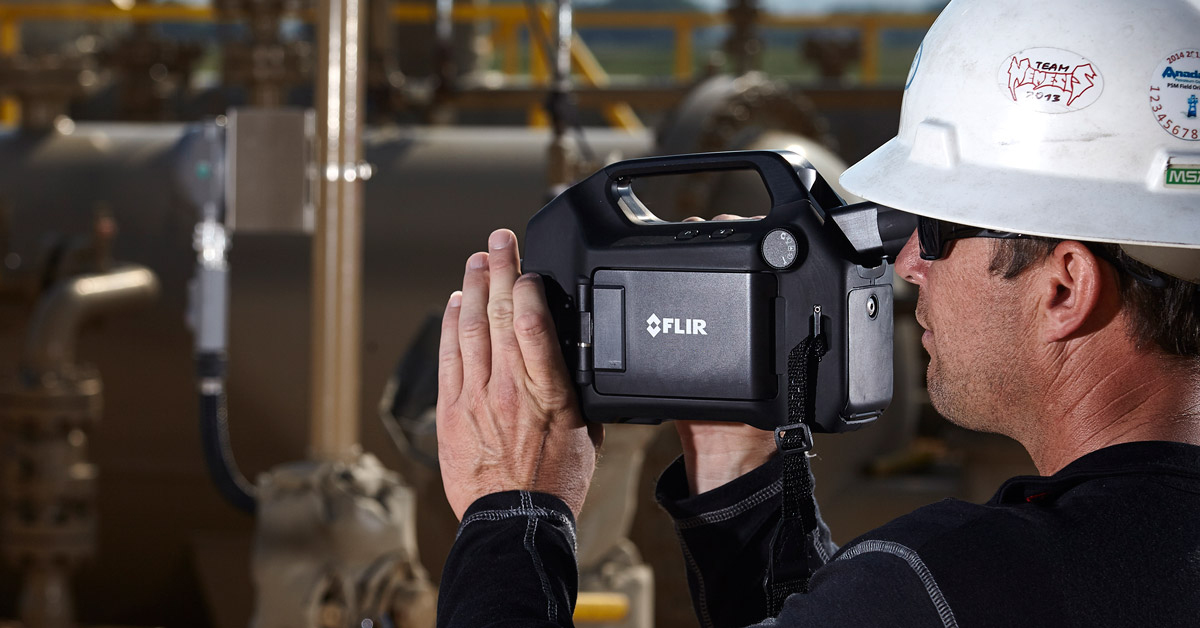 Advantages of Each Technology for Specific Applications Across the Industry

By Craig O'Neill and Ron Lucier

For more than a decade, FLIR Systems has manufactured infrared (IR) cameras to visualize gas leaks of various kinds. These optical gas imaging (OGI) cameras are developed to "see" a variety of gases including hydrocarbons,carbon dioxide, sulfur hexafluoride, refrigerants, carbon monoxide, ammonia and more. These imagers are used for many applications by various industries, including mitigating emissions, increasing production efficiency,and ensuring safe work environments.One great advantage of OGI cameras compared with other inspection technologies is the speed in which the technology can locate leaking components without interrupting the industrial process.

The Science Behind Optical Gas Imaging

Before we address the question of a cooled or uncooled detector in an OGI camera,we can explain the theory behind this technology. Optical gas imaging can be likened to looking through a normal video camera, but the operator sees a plume of gas resembling smoke blowing out. Without an OGI camera, this would be completely invisible to the naked eye. In order for you to see this plume of gas, an OGI camera uses a unique spectral (wavelength-dependent) filtering method that enables it to detect a specific gas compound. In a cooled detector, the filter restricts the wavelengths of radiation allowed to pass through to the detector to a very narrow band called the band pass. This technique is called spectral adaptation (see Figure 1). 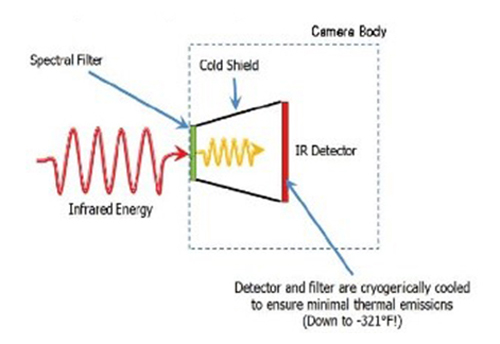 OGI cameras take advantage of the absorbing nature of certain molecules to visualize them in their native environments. The camera focal plane arrays (FPAs)and optical systems are specifically tuned to very narrow spectral ranges, often on the order of hundreds of nanometers, and are therefore ultra-selective. Only gases absorbent in the infrared region that is delimited by a narrow bandpass filter can be detected. Infrared absorption characteristics are wavelength dependent for the majority of compounds. Noble gases such as hydrogen, oxygen, and nitrogen cannot be directly imaged.

The yellow region in Figure 2 shows a spectral filter designed to correspond to the wavelength range where most background infrared energy would be absorbed by methane. 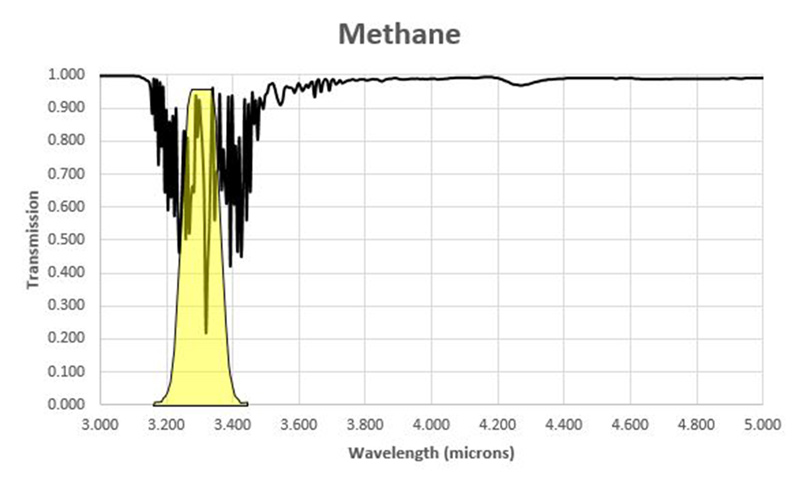 If the camera is directed at a scene without a gas leak, objects in the field of view will emit and reflect infrared radiation through the lens and filter of the camera. If a gas cloud exists between the objects and the camera, and that gas absorbs radiation in the band pass range of the filter, the amount of radiation passing through the cloud to the detector will be reduced. To see the cloud in relation to the background, there must be a radiant contrast between the cloud and the background.

To sum up, the keys to making the cloud visible are: the gas must absorb infrared radiation in the waveband the camera sees; the gas cloud must have radiant contrast with the background; and the apparent temperature of the cloud must be different than the background. In addition, motion makes the cloud easier to visualize.

To address the challenge of understanding "cooled vs uncooled" optical gas imaging cameras, you need to understand wavelengths related to optical gas imaging and the detectors used in these cameras. The two main wavelengths of OGI cameras are commonly referred to as midwave, which ranges from 3 to 5 micrometers (μm), and longwave, which ranges from 7 to 12 μm. In the gas imaging world, these may also be referred to as the "functional region" and the "fingerprint region", respectively. In the functional region, more gases from a single category can be seen by one camera while many individual gases have specific absorption characteristics in the fingerprint region. For example, nearly all hydrocarbon gases absorb energy in the filtered region of the GF320 (highlighted in yellow) but have various absorption characteristics in the longwave or fingerprint region (highlighted in blue) (see Figure 3). 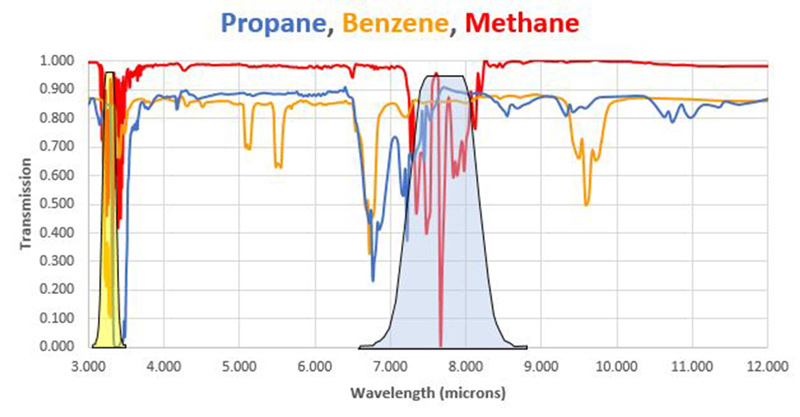 While many gases have absorption characteristics in both the midwave and longwave regions, there are also gases that emit in only one IR waveband. Some gases emit in the midwave and not in the longwave spectrum (e.g. carbon monoxide/CO) and others that emit solely in the longwave spectrum (e.g. sulfur hexafluoride/SF6). These are not gases that would fall in the fingerprint or functional region which often refers to hydrocarbon gases. Below are IR spectra graphs for CO and SF6 gases.

Cooled OGI cameras use quantum detectors that require cooling to cryogenic temperatures (around 77 K or -321°F) and can be either midwave or longwave detectors. Midwave cameras that detect hydrocarbon gases in the functional region, such as methane, commonly operate in the 3-5 μm range and use an indium antimonide (InSb) detector. Cooled longwave cameras that detect gases such as SF6 operate in the 8-12 μm range and may use a quantum well infrared photodetector (QWIP).

A cooled OGI camera has an imaging sensor that is integrated with a cryocooler that lowers the sensor temperature to cryogenic temperatures. This reduction in sensor temperature is necessary to reduce the noise to a level below that of the signal from the scene being imaged. Cryocoolers have moving parts made to extremely close mechanical tolerances that wear out over time, as well as helium gas that slowly works its way past gas seals. Eventually a rebuild for the cryocooler is required after 10,000-13,000 hours of operation.

Cameras with cooled detectors have a filter that is attached to the detector. This design prevents any stray radiation exchange between the filter and the detector which allows for better image sensitivity. This increase in image sensitivity could cause the imager to visualize certain gases more effectively and even allow the OGI camera to meet regulatory standards like the US EPA's OOOOa or other requirements.

Figure 6: Images of a handprint on a wall taken with a cooled thermal imaging camera, and again after two minutes

Figure 7: Images of a handprint on a wall taken with an uncooled thermal imaging camera, and again after two minutes.

Uncooled OGI cameras use a microbolometer detector that does not require the additional parts necessary to cool a detector. These are often made of vanadium oxide (VOx) or amorphous silicone (a-Si) and are responsive in the 7-14 μm range. They are much easier to manufacture than cooled cameras but lack the sensitivity, or Noise Equivalent Temperature Difference (NETD), which makes it more difficult to visualize smaller gas leaks. NETD is a figure of merit which represents the minimum temperate difference a camera can resolve. Figure 6 shows the effects of sensitivity for cooled and uncooled detectors. A better NETD would result in a cooled OGI camera detecting gas at least five times better than uncooled. A similar standard used to determine how well an OGI camera can detect gas is Noise Equivalent Concentration Length (NECL) which determines how much gas can be detected over a defined pathlength. As an example, the NECL of a FLIR GF320 cooled OGI camera (3-5 μm detector) for methane detection is less than 20 ppm*m whereas the NECL of an uncooled solution (7-14 μm detector) is more than 100 ppm*m.

Another consideration with uncooled OGI cameras is the filter. Some cameras are not filtered in the longwave spectra meaning they are just a wide-open detector using unique analytics to visualize a gas. FLIR's patented High Sensitivity Mode (HSM) is an example of a camera utilizing software and analytics to enhance the visualization of gas. Some cameras have more targeted filters built into the camera system. These could be associated with the lens, between the camera and lens, or engineered in several ways.

With uncooled filtering, you lose thermal sensitivity due to limiting the radiation that reaches the camera's detector. This would result in a higher NETD but could present a better image related to gas imaging. As the spectral filter width is narrowed to focus on specific gases, the radiation from the scene decreases while the noise of the detector remains the same and the reflected radiation from the filter increases. This results in creating a much higher quality image related to gas imaging, but decreases the camera's thermal sensitivity for temperature measurement (radiometry). When you have a cold filter, as in a cooled OGI camera, this phenomenon is avoided since there are very small amounts of radiation from reflections.

How to Choose a Cooled or Uncooled OGI Camera

When choosing what camera you need for your OGI needs, the first factor to consider is ensuring the camera in question can visualize your gas. After you have done that, the decision may not always be simple and should not be based solely on price.

While they may be higher in price, there are considerable advantages of a cooled OGI camera. As mentioned above, these units fall into the functional region of hydrocarbon gases, meaning only one camera would be required to visualize a wide variety of gases. In some cases, multiple cameras would be needed in the fingerprint region to achieve the same results. Another unique advantage of a midwave camera is the lack of interference from water vapors. As seen in Figure 7, water vapor has strong absorption in the longwave or fingerprint region which could cause image uncertainty when using a camera.

Increased sensitivity and image quality are important factors to consider when choosing an OGI camera. These not only impact the ability to visualize small leaks but may also be considerable factors when trying to meet regulatory standards.

There are also feature considerations when choosing a camera where a cooled OGI camera is beneficial. The only Hazardous Location-certified handheld OGI cameras in the market are cooled detector cameras. If you require or desire the ability to quantify your gas leak, this is solely done with an OGI camera in the midwave spectrum, such as the GF320, and proprietary software found in the FLIR QL320 quantitative solution. 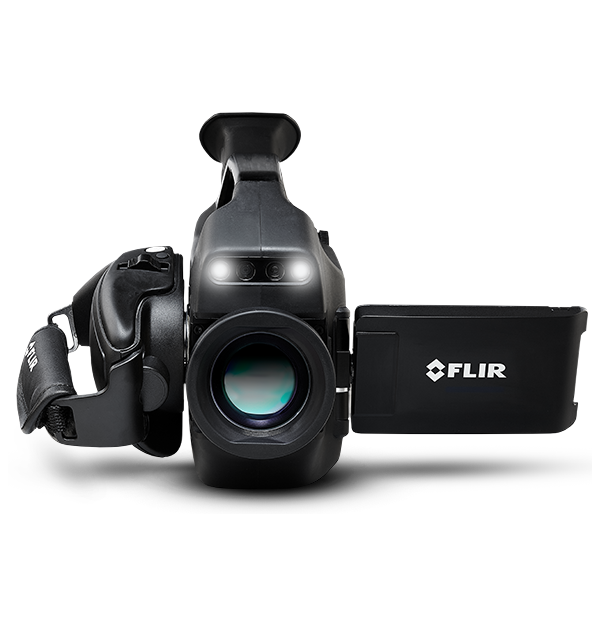 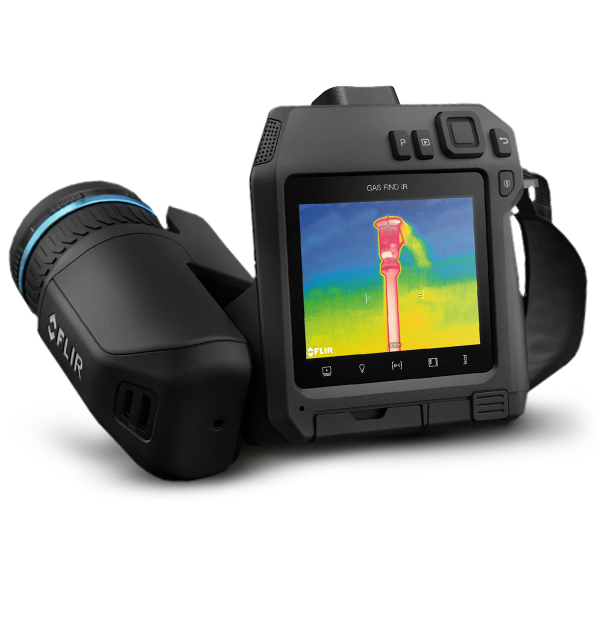 With the introduction of uncooled OGI cameras in the market, there are advantages of this new technology. First and foremost, the cost to manufacture an uncooled camera is considerably lower which results in a lower market price. They also cost less to maintain due to the simplicity in design with no cooler needed—potentially making them more appropriate for continuous, 24/7 operation applications.

Whether you are looking to save money, meet regulatory standards, increase worker safety, or simply to be a good environmental steward, the options are greater than ever and can sometimes be confusing. Many factors can go into a decision to choose an OGI camera beyond price. FLIR provides the widest selection and array of OGI cameras in the market and can assist in your selection process.