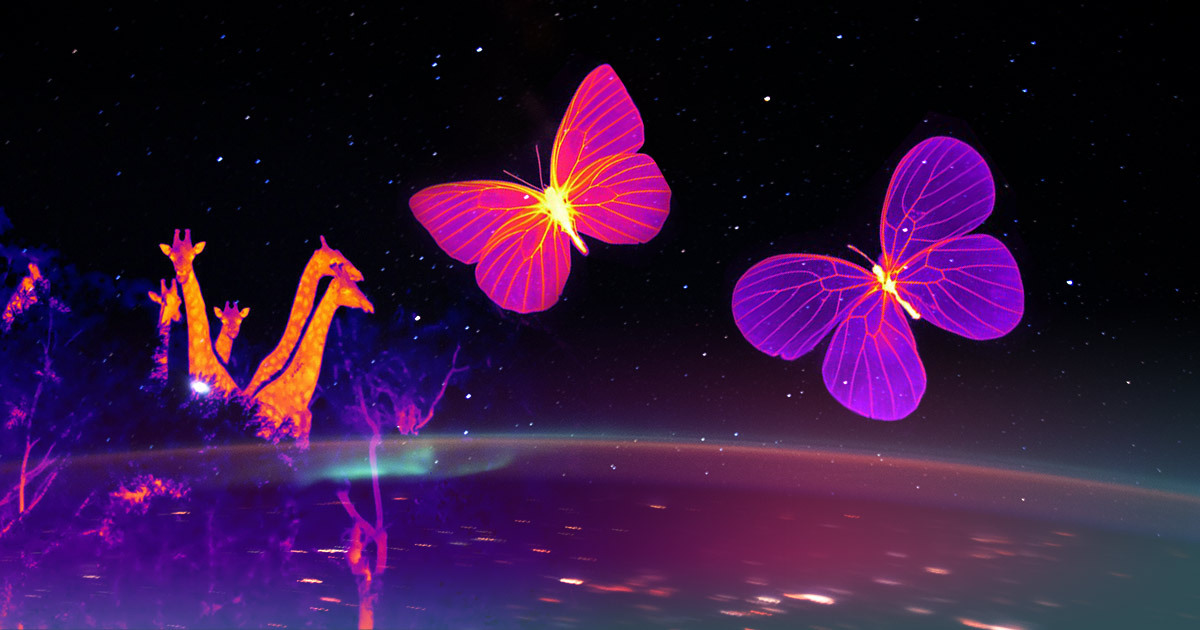 In honor of Earth Day, here is a look at how thermal imaging technology is transforming the way people see and study the world we live in and the valuable lessons to learn.

It is hard to imagine the start of the modern environmental movement took place 50 years ago today—April 22. In celebration of Earth Day, we would like to share some of the innovative and exciting ways our customers are using FLIR thermal imaging technology to make an impact on preserving and protecting the fauna and flora among us.

Colorful butterflies are captivating creatures, and a recent study featuring FLIR cameras revealed even more fascinating findings regarding their wings, temperature, and their ability to take flight.

Published in Nature magazine, the research conducted by Columbia Engineering and Harvard University highlights the importance of temperature regulation in adult Lepidoptera, and how physical and behavioral adaptations help to prevent their wings from overheating.

Using the FLIR SC660 science camera, the team, including Nanfang Yu, associate professor of applied physics at Columbia, examined the thermodynamic properties of the complex living structures in butterfly wings, as well as behavioral responses to heat triggers. Additionally, the technology allows for noninvasive research to measure the temperature difference between the wing veins, membra, and scent pads. As to the purpose of the study, Yu says, “We wanted to find out how small animals were hardwired to survive extreme heat.” He also shares that the thermal imaging butterfly study may also serve as inspiration for other applications, such as the design of heat-resistant nanostructures and heat-sensing aircraft.

Oil mixing with water is never a good combination, especially if it involves an oil spill somewhere in the middle of the ocean. When looking at such a mess, the process can be extremely difficult given the murkiness and darkness of the water in the visible light waveband (VIS). On the other hand, the reflection of the sun, horizon, or sky in the water can be glaringly bright. These unfavorable conditions make spotting the thin film of crude oil or diesel with the unaided eye or a color video camera nearly impossible.

Enter FLIR longwave thermal imaging, a powerful tool in addressing the varying visible light levels, solar interference, and the lack of contrast on the water. Experiments conducted by FLIR personnel at the Oil and Hazards Materials Simulated Environmental Test (Ohmsett) facility off the coast of New Jersey further support these claims and confirm that longwave thermal cameras capture petrochemical spills on seawater better than both visible light imaging and mid-wave thermal imaging, which is rather promising in helping to protect waterways in the event of future accidents.

The Thermal Life of Bees

Another example how FLIR thermal imaging is making a difference comes from the natural world. In this case, it is the world of beekeeping during the cold winter months. For master beekeeper Rusty Burlew, the FLIR ONE thermal camera continues to be a lifesaver to determine the location of the bee cluster inside the hive, appearing as a hot spot on the thermal image.

Location is extremely important because clusters at the top of the hive are a sign that the bees have successfully eaten their honey stores and need food fast.

During the first year using her FLIR camera, Burlew says she saved two hives. “I saved both just by giving them feed—sugar water—to keep them going until spring," she says. Speaking of spring, the FLIR thermal imager comes in handy for checking on bee colonies any time of the year. Burlew adds, “Let’s say you want to add a type of mite treatment, and the directions tell you to put it just above or within the cluster. Where is the cluster? Just take a picture with an IR (FLIR) camera.”

So, as you can see, FLIR has played a part in helping bees—and their beekeepers—keep buzzing along.

A Glimpse of Glaciers From a Different Perspective

While researchers have been monitoring the Andes glaciers with drones for years, Rosie Bisset from Edinburgh University is the first to do so using drones equipped with thermal imaging technology—the FLIR Vue Pro R 640 camera. During a recent expedition with CASCADA, a project that brings together researchers from the United Kingdom and Peru to solve problems caused by retreating glaciers, Bisset turned to FLIR thermal imaging data to get a closer glimpse of how the shrinking surface cover, or debris cover, is affecting the melt rate. Additionally, retreating glaciers are currently threatening the water supply of the people living in the Ancash region of Peru. As far as her experience with thermal imaging, she says, “It’s a technology that is developing quite rapidly at the moment. It can tell us a lot of interesting things that we wouldn’t be able to look at with only visible imagery.”

However, there is still more work to do when it comes to studying the impact of retreating glaciers, and Bisset is hoping the mosaic of thermal images she is building will provide a clearer picture for the future.